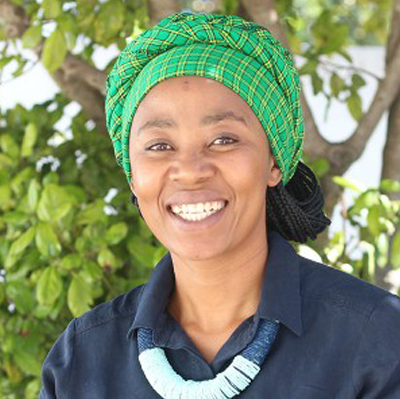 
Ms Dubula- Majolais the Director of the Africa Centre for HIV/AIDS Management at Stellenbosch University.

A former secretary-general of the Treatment Action Campaign, she is also the founder of the Activist Centre for Education & Development and has spent her entire career on the frontline of the fight against HIV/AIDS, campaigning for better public policies for HIV treatment and the advancement of the rights of HIV positive people in South Africa. In 2018, Ms Dubula- Majola was one of 15 recipients worldwide of the Franco-German Prize for Human Rights and the Rule of Law, awarded in recognition of her lifelong commitment to helping HIV positive people, especially women.

She is included in the book A to Z of Amazing South African Women, a publication that honours the contribution of women to South Africa's past, present and future. Ms Dubula- Majola holds degrees in Public Administration and Politics at the University of KZN, Social and Health Services at UNISA and HIV Management from Stellenbosch University.